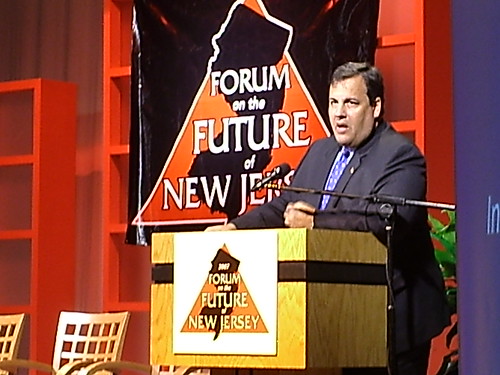 Little relationship between security against terror and restrictions on business, Christie says.

Ft. Dix 6 were not radicalized in Pakistan or Afghanistan, they were radicalized in Mt. Laurel and Cherry Hill, in front of their computers, in their bedrooms. They had videos of Osama Bin Laden, last will and testiment of 2 of 19 9/11 hijackers on their computers. Were caught making a training DVD that they emailed around to other like-minded folks. Two of the five biggest terror cases since 9/11 have been in New Jersey, and demonstrates that law enforcement is on the case. Store clerk who saw the video called Mt. Laurel PD, and because of their sensitivity post-9/11, they contacted federal authorities leading to the investigation that led to the arrests.

Why is economic growth a problem in NJ? Some problems outside my job description, Christie says. But one problem he hears about is lack of integrity in the state and how discouraging to try to interact with government without feeling you’re being shaken down at the point of a loaded gun. Basic problem in NJ is “we don’t trust each other, and we certainly don’t trust our government,” and it’s at every level from local up to state. Business has good reason not to trust government.

FBI forgot the envelope in one sting, $5,000 cash, official stuffed in his pocked, then put his arm around the FBI guy, and said “I love you, man.”

You can’t make this up, Christie says. The guy pleaded guilty on Friday.

Businesses looking to interact with city governments that have this corruption are uncomfortable, says Christie.

NJ is the “butt of derision” around the country.

He quotes an editorial from the Statesman Journal in Salem Oregon, which wrote about some of the corruption and then concluded, “Ah, New Jersey.”

This may be one of our ugliest periods, but we have a long and rich history, he says of the state. We have an obligation to leave this place better for children and grandchildren than it was left for us.

Asides: We don’t have a state song, but as a Springsteen fan, Christie hints that he has some ideas…Readers, vote for your favorite version of Born to Run…

Christie concludes: We can’t afford the “luxury” of cynicism. It’s unpatriotic to be cynical. We have the responsibility to change what’s happening in the state, “a long and ugly slog.”

Politicians don’t think the public is watching. And when they make promises they don’t keep, and are caught, “they are like a child.” We need to start holding them to account, Christie says. It’s the beginning of the slippery slope to criminal conduct, he believes.

NJ is a great place to live, and we’re not going to allow the corrupt to define who we are, Christie concludes. Tells his assistant US attorneys, “every day they work in your name.”