Noting with sadness the passing of President Gerald Ford, we wanted to add a light moment to everyone’s memories of the 38th president.

In this very short podcast we present an aircheck excerpt from Tom Snyder‘s “Tomorrow” show, a late night talk show broadcast on the NBC television network in the 1970s. On April 17, 1976, Snyder opened the broadcast with a blooper of President Ford being introduced at the Daughters of the American Revolution convention in Washington. Snyder’s introduction is almost as much of a classic as the actual blooper.

During the 1976 presidential election campaign, I was a student broadcaster at WMCX-FM, the radio station of Monmouth College (now Monmouth University), and we obtained press credentials for Gerry and Betty Ford’s campaign visits to New Jersey.

Here are images of the press credentials from the visits: 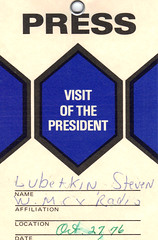 I remember vividly that when Air Force One arrived at what is now Atlantic City International Airport (then it was the FAA’s NAFEC test facility near Pomona, NJ), Ford strode off the plane to face a bullpen full of reporters, including the White House press corps, which had landed in its own plane just a few minutes before Air Force One. Tom Jarriel, then White House correspondent for ABC News, immediately tried to start the questioning, but Ford waved him off.

“I’d like to take questions from the local media first, Tom,” Ford said with a smile. Even as a young college radio reporter, I knew that he had won over the local news media by shutting down Jarriel.

The next day, Betty Ford made a separate visit to New Jersey. Her plane landed at the old passenger terminal at Newark Airport. It was kind of ridiculous but we had to drive all the way to Newark Airport to get our press credentials, then ride the press bus all the way back to Monmouth County, where she made an appearance at the Monmouth Mall in Eatontown, and then back on the bus to the airport to retrieve our car and drive BACK to Monmouth County again.

At the airport, Betty was met by a CB Radio club (CB Radio was the Internet of the 1970s) that presented her with a windbreaker personalized with her CB “handle,” or nickname, which was “Big Mamma.”

I’ve got some good Kodachromes from the Ford visits.