Panel 3: The Natitonal and International View (from 10,000 feet)
Leading Corporations discuss the challenges they face in remaining in the state.
Moderating is Kathy Kish of MarketEntry, a marketing communications firm. 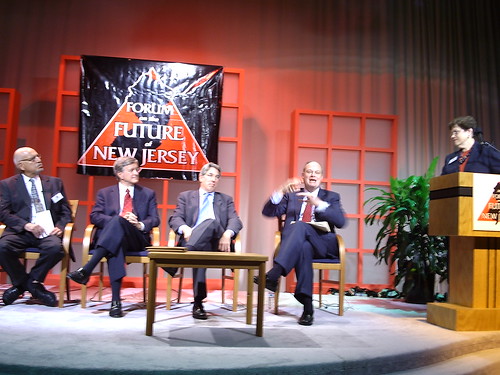 Notes that he visited Google last week to see new version of Google Earth. Driver said he was using Google Earth today to get to Trenton. Even with Google Earth you need the right address. There’s a difference between Stockton Street and South Stockton Street. “Nothing here looks familiar.” Sounds a lot like New Jersey in general, huh?

Not a NJ resident, but spends most of his time here because of his work for Verizon.

In NJ, Verizon can’t charge a late bill fee to nonpayers. Says something about state’s mindset. Also strange to people from outside the state that you can’t pump your own gas in NJ. It says there are forces here that prevent pepole from doing “normal” things.

New Jersey has a great comms infrastructure. Fiber to the home $1 billion/year means state will be most wired in the country.

Reputation of state worse than biz climate. State’s government viewed as corrupt. Businesses want to invest in places with stability and where the processes work right. Doesn’t think NJ deserves the bad reputation. State gets a bit of a [bad] rap. Business climate is viewed badly, partly because of momentum in attracting high wage jobs. Decline in the # of high wage jobs in the state. Need to find ways to break out of that.

Leadership is a key issue.Good leadership will cause people to take a “second look.”

Exchange among the panelists:

Kish asks Biggins, small state, small business is important but we are very respectful of the big companies like Verizon that have regional or corporate HQs here. Do we want those companies to stay?

On NJ, he says that one of our most important industrial assets is R&D, knowledgeware. Losing that, major pharma companies, some have said publicly won’t invest further in NJ. Won’t move, but migration “by attrition.” We have a tax base and legislature, even as we cooperate as a region, have healthy competition. PA is very effective in pharma industry, peeling off large opportunities but also small entrepreneurial companies. NJ doing reasonably well with startups, but regionally losing more than we are gaining.

Tampa FL has a “Wall Street South” – lots of financial svcs jobs sailed right over NJ and PA, in labor surplus markets where the regulatory environment was hospitable and costs low.

NJ regulatory environment “unpredictable or worse.” Captured by interest groups where we are not achieving balance, even with aggressive advocacy on all sides. NJ needs to do a lot in fact and in perception to “break out of the morass,” both the facts and the perception that it is a difficult place to do business. 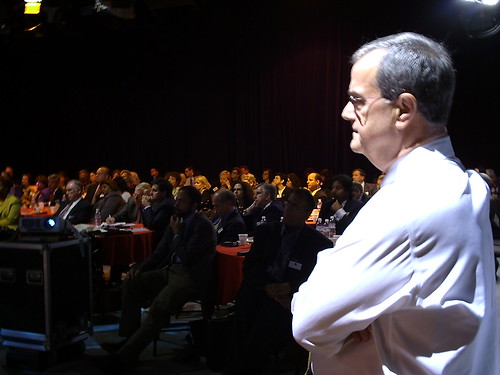 Leadership New Jersey: Program chair Michael Willmann and the studio audience listen to Panel 3 discuss the national and international view, at the Forum on the Future of New Jersey, 10/24/07, Trenton NJ.

Mentions famous sign on Trenton-Morrisville bridge, “Trenton Makes, The World Takes.” -Things do not stand still, every place is a work in progress. Philadelphia/NJ region has remade itself. Fewer manufacturing jobs in region than national avg. Service based, knowledge driven economy. Most of the world doesn’t know that. Perception of declining rust belt area with low income populations and unemployment.

Need to help create the parade for the leaders to lead. We’re the stewards, need to help the leaders make the decisions they need to be able to make. We need to be “very afraid” of where we are going to be 20-25 years from now.

Nick Montalto, Diversity Dynamics
Nicholas Montalto says: Global marketplace. The talent-attracting “nodes” will be most successful in the global economy.

Not all environmental regs are good, properly applied, or properly sized, says Biggins. Have a guerilla campaign going on that is “almost beyond civility” in some cases. Need to achieve balance between economic development and quality of life, but lookat the extent to which economic development will vote with its feet because it is being restrained.

Morr: You avoid those places that make business difficult. If regulations are tough on both local and nonlocal companies, that’s OK, but it’s the consistency thing. Need to have higher expectations of elected officials and create mechanisms that bring resolution and harmony. Electronic voting in Congress makes it impossible for members to duck issues that may be good for economy or harmful to their constituents.

Nick Montalto: If we are to attract best and brightest, pepole look for opportunities to enjoy leisure activities, so a strong environmental sensitivity is important. Also important strong arts and culture infrastructure, and vibrant ethnic communities. Ethnic diversity is one of our great strengths, are we tapping into it?

Leadership NJ's Forum on the Future of New Jersey 2008 was held Wednesday, October 15, 2008. More than 50 speakers throughout the state challenged the audience to think in new ways about how to improve [Read more…]

Once again this year, Professional Podcasts has produced video podcasts from the Leadership New Jersey Forum on the Future of New Jersey. This program was recorded November 9, 2010 at New Jersey City University, Jersey [Read more…]