Panel 2: The Regional View (from 500 ft.)
Regional agencies offering their strategies for attracting business and the investments needed to ensure the state’s competitiveness.
Moderated by Jack Lettiere of Nation’s Port 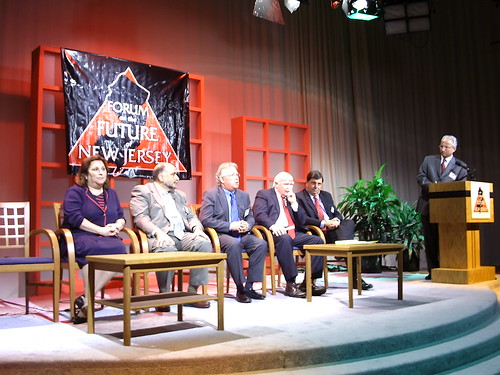 Assets we have are “blatant.” Problems we have challenges are to use them intelligently. We “bifurcate” our thinking into North and South Jersey. Example, “that little gritty port in Camden.” great desire to get rid of it to build nice waterfront properties, but without planning to replace it.

Major growth will be in the southern part of the state. Trying to coordinate through CRDA all of the state agencies involved in land use and transportation infrastructure. Gov. office has bought in and everyone is on board.

Talking to DEP about land use.

Bombarded every day by politicians promising not to raise taxes. Thinks they don’t understand the problems.

Tom singles out Steve Adubato who is running a North Ward center in Newark and is “saving kids” by getting them out of the Newark school system.

Need to compete not among ourselves, but with other states. Camden port – can accommodate retail, entertainment and port activity if we work smarter.

Now have $1.3 billion stadium “finest football facility in the US” built by JV of Jets and Giants. Will have mass transportation link, rail connection to sports complex, Feb 2009. Bring people from Bergen, Morris, Monmouth, Hudson Counties, and NYC to Meadowlands for sports events.

Jobs, tax revenue being created by construction, but also hope that sports complex will help that region of NJ become a tourism destination. Thinks tourism will help drive NJ economy, ranked second now bringing people to the shore, wants to bring them to Meadows.

Surprising that one of most important “eco tourist” destination is the 6,000 acres of the Hackensack River estuary area where people are coming to visit.

Housing costs are a problem, very expensive to live here. Have to look at overrregulation, how to incent the development community to build houses, office, and retail in areas of the state where that is desirable.

Susan Bass Levin (Wikipedia), Port Authority of New York and New Jersey (Website is www.panynj.gov, but as of 11:26AM it was coming up as not reachable.

Former mayor of Cherry Hill, getting things done, because it’s a bistate agency, take longer because of the strategic view, longer tail solutions for problems. NJ a very small crowded state with the perfect location. Road and transit, bridges, tunnels, all far beyond capacity. But election to election, local government will not solve those problems. That’s why a bi-state agency is important.

Building ARC “Access to the Region’s Core”, new tunnel for trains to NY. Cost $7.6 billion, but will take cars off the road.

72 percent of new households in the region will be west of the Hudson, that’s NJ. People from here want the jobs that will be created in NYC. Tunnel also creates construction jobs and economic development in the towns served. Not a short-term project.

The game has changed. What we have begun to develop is entrepreneurial spirit in NJ that wasn’t present even in the early 80s. The sectors, pharma, biotech, IT, military, there are ups and downs in the sectors. Fortunately not all “in the toilet” at the same time.

Silicon Valley successful because if things don’t work out at one company, you go across the street to another, you don’t have to move.

Susan Bass Levin – Public transit (in response to audience question) needs to be reliable, fast and cheap. Basic question is these things aren’t cheap, talking billions of $ and multiyear commitments. Question of where do you put trains. In Cherry Hill looking at expanding train service, had a “raucous” meeting where everyone objected to the noise and train traffic that expansion would bring.

Bob Gross – PATCO looking at expanding west in Philadelphia and east into NJ. Multibillion-dollar projects, difficult, one thing they are doing is a transit-oriented development component, to fold smart technology into stations that make them more than just a railroad stop.

Sustainable Cherry Hill’s “Soul of Sustainability Panel” is a podcast