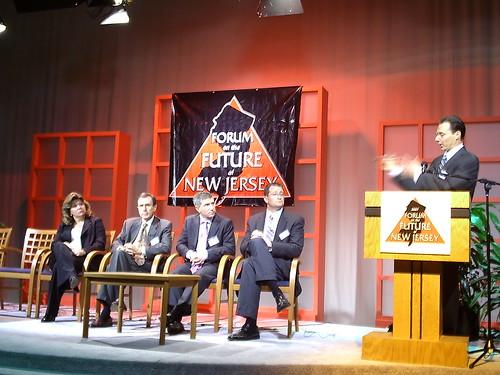 Panelists opening comments on why businesses choose NJ when they can go anywhere.

Facility in NJ is most expensive and time-consuming they’ve every built. Regulations weren’t impossible but a significant drag in the timeframe, 6-9 months behind their plan. Influence of construction costs related to unions, they did a great job, and got a great facility, but it was a challenge that raised costs “and some blood pressures.” Happy to be in NJ, good run so far.

Estimates $1 million in transport cost savings by being closer to customers locating the plant here.

Jim Hughes, Dean of the Bloustein School at Rutgers

Given that concentration, gives the state second-highest median household income. Maryland just knocked NJ off its #1 perch. Income in New Jersey 33 pct higher than the rest of the nation. one of the most “potent” consumer markets in the country.

NJ has one of the finest labor forces, fifth among the states in percentage of adults with BA or higher degree. Third among states in Ph.D degrees. Attractive for pharma companies, “a lot of workers to steal from companies that are already here.”

Geography is good – NYC still the “dominant economic node” in the country, and being near it is important.

Incredibly important market, highly talented workforce. Company nationally and internationally is focused on the consumer. More than 60% of revenue comes from consumer bank. NJ one of largest markets for the bank. Consumer opportunities ranging from highly wealthy individuals to students. NJ have 6,000 employees, and it’s the most expensive place for bank to do business.

Kenneth Traub, American Bank Note Holographics.
Move to NJ was consolidation from Westchester County, New York; Dalton, Massachusetts; and Pennsylvania.Turned out to be a teriffic move for his company. Ironic reaction to Chris Christie’s remarks about corruption, he says he took control of the company after previous CEO was caught committing securities fraud. Very ironic considering that company makes security holograms for document and currency protection.

Should be looking at positives, gets encouragement from Rep. Rush Holt to locate here. Increased his space 80% but saved over half a million dollars in operating expenses.

Comment from Joseph Montemorano, Princeton University, state hasn’t reinvested in its research universities. Sees a lack of comprehensive strategy, except becoming a “one-industry” state, namely pharma. Thinks state needs to make transformation from telecomm to IT, but needs someone at state level to discuss where the investments should be made. Universities otherwise may pursue paths independently of state.

Question from audience member: What are some of the givebacks from companies, re diversity, community, minority and women-owned businesses, what are the commitments on that?

Bohn’s company has donated to special needs children in Florida. Came from a casual conversation between two executives.

Questioning was thin and softballs mostly.

NJSpotlight offers videos from its March seminar on Medicaid Expansion

Lubetkin Communications produced another roundtable video for NJSpotlight.com in March, focusing on the impact Medicaid expansion will have on healthcare costs in New Jersey. According to some estimates, expanding Medicaid eligibility in New Jersey could [Read more…]

For the second year, The Lubetkin Media Companies is producing a signature series of podcasts for our longtime client, NJSpotlight.com, from the news and public policy reporting website’s second annual all-day conference, Spotlight on Cities held [Read more…]