Yesterday I tweeted on Twitter (I’m PodcastSteve, if you want to follow me there) about former NJ Gov. Jim Florio’s recent appearance on CNBC, in which he advocated a Conrail-like solution to the auto industry crisis. Florio, who was chair of the House Surface Transportation Subcommittee during the original Conrail privatization process, may have an excellent point. And others are starting to think this way too. As I was typing the Twitter message, I started to refer to the solution as "ConCar" (as in Conrail) and then deleted that reference.

For those of you who want to go into the Wayback machine on Conrail, here’s a link to the article I wrote in PR Strategist about the Conrail privatization battle.

As a special treat in advance of the Conrail alumni holiday party later this month, we’ve decided to bring to our web video platform the 1974 Penn Central video used to convince Congress that the railroad needed saving.

The film is an interesting artifact that shows how the railroad made clever use of the social media of the day; i.e., a corporate film, could be used to educate constituencies about the real day-to-day problems facing the industry.

I also call to your attention the Middle Chamber Books podcast interview we conducted in February 2007 with Rush Loving, a former associate editor of Fortune magazine, and author of The Men Who Loved Trains: The Story of Men Who Battled Greed to Save an Ailing Industry, about the recent history of U.S. railroads, particularly the Penn Central, its bankruptcy and consolidation into Conrail, and then Conrail’s privatization and sale.

Rush Loving steps off
an inspection trip on a Norfolk
Southern locomotive in October 2003.

A couple of years ago, when the legendary L. Stanley Crane passed away, I attended his memorial service with many former colleagues. Crane, who as chairman made Conrail profitable and stood up to then DOT Secretary Elizabeth Dole in her ill-advised scheme to sell Conrail to Norfolk Southern, had the perfect model for the auto industry.

In April 2006, I drafted an op-ed article that I submitted to newspapers in Philadelphia, Washington, and Detroit.

No one took me up on it.

I should have published it on this blog then.

It’s worth publishing now. Wherever I mention General Motors, you can substitute the entire auto industry. It’s understood.

To Solve General Motors’ Problems Requires Railroading Through A Solution

In the very public debate about how to solve General Motors’ woes, it’s amazing that no one has considered how legendary railroad manager L. Stanley Crane imposed effective and successful strategies that saved Consolidated Rail Corporation (Conrail) from a similar death spiral a little more than two decades ago.

Not satisfied with a mandatory retirement as the close of his highly successful career at the Southern Railway following the Southern’s merger with Norfolk & Western, Crane accepted the challenge of becoming Chairman and CEO of Conrail when the large northeast-midwest rail system was on its knees. 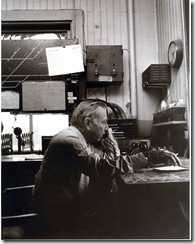 Conrail was the federally imposed compromise solution to the bankruptcies of five northeastern and Midwestern railroads in the 1970s, following the larger collapse of the ill-fated Penn Central.

All these railroads were merged into Conrail after failing to adjust to the economic realities of the railroad industry, which had changed dramatically following the construction of the Interstate Highway System in the 1950s and early 1960s.

The early planners of Conrail had a vision strikingly similar to the strategy currently being employed at General Motors. One is reminded of the catch phrase behind the movie, “Field of Dreams,” which suggests that we should “build it and they will come.”

Conrail’s planners assumed that rebuilding and renovating the decrepit physical plant of the railroad would attract back the traffic that had been lost to trucks because of decades of poor service and track conditions.

To get labor unions to agree to the Penn Central merger, its management agreed to pay union members until age 65 whether there was work for them or not. This made it impossible to change the size of the workforce to reflect the economic realities of the business.

GM is now facing the consequences of agreeing to this kind of guarantee in an earlier labor negotiation.

When Conrail was formed, the labor protection situation got even worse.

“Build it and they will come” thinking led Congress to codify into federal law a labor protection feature of the Penn Central merger that GM seems to have adopted just as the Penn Central did, in hopes of buying labor peace – the “jobs bank.”

This guaranteed wage was written into the Conrail enabling legislation as “Title V,” and tens of thousands of idled rail workers collected annual salaries while Conrail hemorrhaged federal dollars. The hope was that when traffic vo
lume increased, these workers could be productive again.

Stan Crane looked at this issue from a different perspective when he arrived at Conrail in 1980. He argued that the railroad did not have the luxury of rebuilding a gold-plated physical plant in the hope that traffic would return.

Instead, he demanded that his managers size the railroad’s physical plant and staffing for the current level of traffic, enabling him to redistribute and use more effectively such assets as locomotives, rail, and other equipment.

On one inspection trip, he ordered his managers to rip out two of the four tracks circling the railroad’s iconic Horseshoe Curve in Pennsylvania, a stretch of railroad that some diehards joked “was a four-track railroad since before it was built.”

The expensive specially tempered rail was valuable and could be used elsewhere, and Crane argued that traffic volumes did not justify keeping it idle on the Horseshoe Curve.

He also argued against Title V labor guarantees when there was, for all practical purposes, no prospect of those idled workers ever returning to work on the railroad.

Many railroaders grumbled at Crane’s approach, just as many GM managers seem resistant to making hard decisions today. But these are precisely the decisions needed if GM is to survive.

Crane’s cost-cutting leadership helped convince union leaders to join forces with management and convince Congress that Conrail could be profitable and successful.

This labor-management cooperation convinced Congress to remove the legislative burdens it imposed on the nascent Conrail in the 1970s, and allowed Crane to lead the company to its successful public stock offering in 1987 – the largest IPO in U.S. history up to that time, what was then a stunning $1.9 billion deal (a mere rounding error on the dot-com IPOs of recent memory).

The lesson for GM from Crane’s Conrail experience is that GM can’t afford to size its facilities for future hoped-for sales.

It needs a physical plant that matches its current level of sales, and a workforce that matches.

GM also needs its leaders to speak honestly about getting rid of the burden of its unrealistic “jobs bank.”

It can’t continue to pay full salaries and benefits for workers who have little hope of returning to work for the auto maker.

Whatever the mistakes of GM’s past, management and union leaders need to collaborate in a solution that helps the auto maker survive in some smaller form.

That would be far better than a solution that wrecks the company completely.

That’s the lesson Conrail learned from L. Stanley Crane, and GM should call its next series of plays from Crane’s playbook.