In epsiode #23 of the CompuSchmooze podcast, social media and internet entrepreneur Jeff Pulver discusses his commitment to early-stage investments in startup technology companies in Israel. We spoke with Jeff during a recent social media breakfast gathering he hosted in Princeton, NJ. 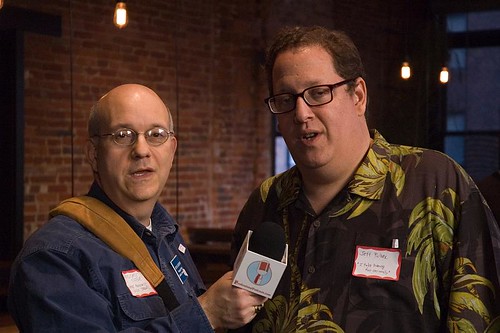 Steve photographed with Jeff Pulver at the Philadelphia breakfast.

This podcast is based on an interview conducted at the Princeton meeting.

Sponsor: The CompuSchmooze podcast is brought to you by GoToMeeting.com. Try GoToMeeting free for 30 days! For this special offer, visit www.gotomeeting.com/techpodcasts.

Here’s the text of the related “CompuSchmoozeTM” column as it appeared in the Jewish Community Voice of Southern New Jersey.

He became an avid user of voice technologies in the late 1990s, and a company he started, Free World Dialup, obtained a milestone decision from the Federal Communications Commission in 2004 that protected Internet-based voice technologies from additional federal and state regulation. The decision is often referred to as the “Pulver decision.”

Later, as chairman of PulverMedia, organizer of conferences under the “Voice On the ‘Net” banner, he recognized that the Israeli military and high-tech sector had made a major contribution to the growing success of Voice over Internet applications, but no one else seemed to be giving Israel due credit.

Israeli companies were attending the conferences regularly and chasing opportunities in the rest of the world, Pulver said.

Voice over Internet technology was largely developed for internal use by the Israeli Defense Force in the 1980s, Pulver explained in a recent interview during a “social media breakfast” in Princeton.

In 2005, Pulver organized his first high-tech mission to Israel that culminated with recognition ceremonies in Jerusalem for 23 Israelis responsible for making voice technology commercially viable.

“If I’m ever looking for inspiration or for what’s happening next in technology, there’s no better place that I’ve ever found to go,” he said.

“Typically it’s below the radar of any professional venture capitalist or angel investors,” he said. “I meet with people who are just absolutely brilliant, they have to have an idea that I can connect with, and I’m investing in helping them build their idea.”

During 2008, Pulver said he’s raising money for a microfund of $3-5 million for investment in Israeli technology companies.

The semantic web simplifies how a web browser will collect and display seamlessly all the different ways people refer to themselves online, so that a comprehensive snapshot of an individual’s online presence can be pulled together automatically.

Most of the small firms in which Pulver has invested are still in “stealth” mode, not yet ready to discuss their technologies.

“I’m hopeful that a bunch of the companies that we’re nurturing will be able to grow,” Pulver said. “What I really enjoy is seeing the seed of the idea, even helping to incubate it myself.”

Pulver makes his first of a planned seven 2008 trips to meet with Israeli startup companies in March. A VON conference is slated for April in Tel Aviv.

While he’s there this month, he will also host a Tel Aviv seating of his continuing series of social media breakfasts. At these informal gatherings, online devotees of Facebook, Flickr.com, and Twitter get to meet Pulver and each other face to face, often for the first time.

Pulver held the first of the breakfasts this year in Philadelphia and Princeton, later moving on to Washington, Providence, RI, and Fort Lauderdale.

Pulver acts as party host, and provides breakfast participants with “real-time” social media networking kits containing stickers, Post-It Notes, labels and markers to use for what he calls real-time social tagging. Participants write tags or keywords and paste them on each other, as if they were adding bookmarks and keywords in an online environment. By the end of the meal, everyone is adorned with multiple tags and labels, and some even have larger labels or “walls,” where people have written messages, like they do on Facebook or MySpace.com.

Compuschmooze May 2014: Videos get shorter but viewers stay longer

Editor’s note: This column is crossposted from the Jewish Community Voice of Southern New Jersey. You can see the original column there. It seems like web developers are convinced that the world’s attention span for [Read more…]

Middle Chamber Books Podcast #42: “100 Things to Do in Philadelphia Before You Die,” with Author Irene Levy Baker

ACE USA, the U.S.-based retail operating division of the ACE Group of Companies, is pleased to share episode #1 of the “Ace ESIS Podcast,” part of an occasional series of audio podcasts discussing selected risk [Read more…]