In epsiode #21 of the CompuSchmooze podcast, we have two interviews and spotlight some podsafe music.

First, a conversation with Stan Schwartz and Lisa Moore, creators of Toonamation, a software plugin for graphic design programs that can change a photo or a video into a cartoon. 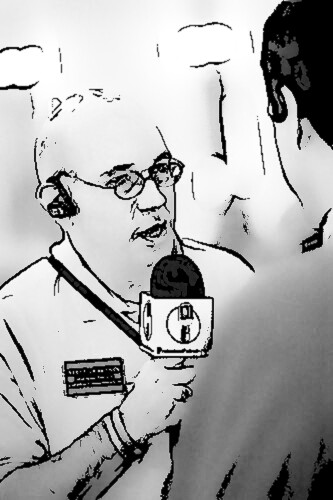 Featured Music: A new item in our podcasts will be a spotlight on podsafe web-music. In this episode, we offer “Swingset Chains” from Loquat. The song has appeared on One Tree Hill, the WB Network series. For more information or to purchase the Loquat CD, see the links below.

More On This Album

Nanotechnology is being built into many of the consumer products we buy, from tennis raquets to suntan lotion, but what do we really know about chemicals and substances that are being engineered on the molecular and atomic levels? Not very much, according to surveys conducted by the Project on Emerging Nanotechnologies and Consumer Reports. We chat with Evan Michaelson of the Project about nanotechnology and how it’s being integrated into everyday items.

Here’s the text of the two related “CompuSchmoozeTM” columns as they appeared in the Jewish Community Voice of Southern New Jersey.

In 1985, the Norwegian band a-ha scored a popular music video hit with “Take On Me,” which relied heavily on a video-to-cartoon special effect called rotoscoping. You can see the music video at http://video.google.com/videoplay?docid=379399441132904905.

Rotoscoping is very time-consuming. It involves a cartoon artist more or less tracing the cartoon drawings on a projected live action video, a frame at a time.

That’s why the online video world is starting to get very interested in “Toonamation,” a digital photo/video technology being developed by computer graphics guru Stan Schwartz, his programming partner Seth Aaronson, and Schwartz’ wife Lisa Moore.

Schwartz was demonstrating Toonamation at the tail-end of the Blog Philadelphia conference in Center City in July, and was expecting to be hawking the program again at PodCamp Philly September 7-9 at Drexel University.

Toonamation rapidly converts live videos and still photographs into a wide range of cartoon-like images. The video cartoons look very much like the expensive, hard-to-produce rotoscopes.

Schwartz said he created Toonamation to be able to animate presentations quickly. “I wanted something that would look cool right away,” Schwartz said in an interview.

Schwartz and Moore live in the Philadelphia area, and collaborate with Aaronson from his home base in the Boston area.

Schwartz has a Ph.D. in cognitive psychology, and later, to help a psychology colleague, taught himself the high-level 3D mathematics behind digital video special effects like changing the lighting in a photo, or stretching a face in a picture. He quickly became engrossed in the math, which coexisted fruitfully with his artistic side

He spent some time doing artificial intelligence research in medical technology, and later applied his mathematics expertise to his experiments in painting.

He’s now applying this expertise to computer animation. Aaronson, whom Schwartz met through a social networking site, is a software engineer, and Schwartz says Aaronson is able to build “industrial strength” software around his concepts for computer genera
ted images.

“I always had this need to ‘roll my own,’ because I wasn’t satisfied with what was out there,” said Stan. “There are a lot of things in PhotoShop that you can get very cool effects, but they take multiple iterations and lots of tweaking, and I wanted something that would be several orders of magnitude faster.”

There is a plug-in version of Toonamation available currently for the Adobe PhotoShop family of digital photo products, at http://www.digitalanarchy.com/toon/toon_main.html. You can see samples of videos that have been turned into cartoons, and download the plug-in software for a demo.

Stan applied Toonamation transformations to a video created by Lan Bui (http://www.lanbui.com). Bui attended the ComicCon comic book conference and set his digital still camera to capture rapid sequences of photos which he then stitched together into a continuous video.

The resulting cartoon version of this “picture video,” as Bui calls it, is an intriguing animated short subject that looks as if it started out as a cartoon, not real pictures. You can see the original picture video at http://www.videoofthemoment.com/2007/07/comic-con-2007-picture-video.html, and you can see the interview with Bui about the Toonerized version at http://stevegarfield.blogs.com/vlogsoup/2007/08/vlog-soup—lan.html.

While you’re visiting Lan’s video blog, you also should take a look at Lan’s picture video of Kristen and Kevin’s Wedding. It takes wedding photography into the music video genre in a very ntertaining way.

You can see some examples of Toonerized photos from the Blog Philadelphia conference on Stan’s Flickr site.

If you are of a certain age, and someone mentions microscopic technology, it might conjure up the 1966 movie, “Fantastic Voyage,” in which Racquel Welch and the less-memorable actors Donald Pleasence and Stephen Boyd lead a team of miniaturized scientists in a high-tech medical submarine that gets injected into a scientist colleague so they can repair a blood clot in his brain. Along the way, they battle white blood cells and other elements of the body’s defenses. They only have an hour to complete their mission before they will return to normal size.

While “Fantastic Voyage” was science fiction, the development of technology at the microscopic level is not only real, but is being used in a wide array of consumer products already.

The Project on Emerging Nanotechnologies (www.nanotechproject.org), sponsored by the Woodrow Wilson Center for International Scholars and the Pew Charitable Trusts, is keeping an eye on the potential health and environmental implications of incorporating tiny technologies into our everyday products, according to Evan Michelson, a research associate with the project.

Nanotechnology, Michelson explained, involves “the ability to measure, see, manipulate and manufacture things usually between 1 and 100 nanometers. A nanometer is one billionth of a meter; a human hair is roughly 100,000 nanometers wide.” At this small scale, materials take on different properties and behave very differently from their normal-sized cousins, he said.

Although the Project estimates that more than $50 billion in products incorporating nanotechnology were sold globally in 2006, fewer than one in 16 Americans indicate they have heard “a lot” about this tiny science.

“Efforts to inform the public have not kept pace with the growth of this new technology area. This increases the danger that the slightest bump – even a false alarm about safety or health – could undermine public confidence, engender consumer mistrust, and, as a result, damage the future of nanotechnology, before the most exciting applications are realized,” said David Rejeski, director of the Project. “If they do not effectively engage a broad swath of the public in steering the course of nanotechnology, government and industry risk squandering a tremendous opportunity.”

While exploring the beneficial use of nanotechnology to improve, say, the efficiency of batteries, or the durability of textiles, scientists are also concerned about health effects, because these materials often behave differently at the “nano” level, leading to unknown or unexpected effects on individuals, Michelson explained.

The Project has developed an inventory of consumer products that incorporate nanotechnology. The list started in March 2006 with about 200 products. This year, the list has grown to more than 500 products ranging from sporting goods, stain resistant clothing, dietary supplements, and automobile parts.

Among the products in the inventory, Daewoo Electronics offers a vacuum cleaner whose “Nano Silver-coated ‘Cyclone canister’ … has the effect of removing bacteria and a plethora of dust particles, inhibiting odour, allergy-inducing spores, and other harmful debris.”

Land’s End’s ThermaCheck Scarf incorporates “Nano-Tex,” described as “a nanotechnology (molecular science) applied to each fiber in the fleece,” that “resists static cling and shock, repels lint and pet hair.”

There are currently no standards for special handling or labeling for nanomaterials. For example, many sunscreens are using nano-engineered titanium dioxide which ensures that the lotion applies smoothly to the skin, goes on clear and dries clear, Michelson said. But there are no requirements that manufacturers using nanotechnology have to label it as such, and none of the sunscreen manufacturers indicating to the Project that they use nanoengineered chemicals give any indication on their labeling.

“Large scale commercialization is already happening,” he said. “There are more than 20 countries with products in our inventory, and we think this will increase over time.”

The Project’s website also includes a series of audio podcast programs, “Trips to the Nanofrontier,” ( that include interviews with leading nanotechnology researchers; video podcasts, a newsletter, and a downloadable version of the report, “NanoFrontiers: Visions for the Future of Nanotechnology.”